This recipe was in the kiddy section of the Bangor Daily News last week. It's quick, easy and yummie. Can't wait to try it with fresh tomatoes out of the garden.
BAKED SLICED TOMATOES:

Beat eggs in one small bowl and the bread crumbs in another.

Dip each tomato slice in the eggs and then in the bread crumbs.

Place tomato slices side by side on a greased cookie sheet.

Sprinkle with salt and pepper. Dot tops of tomatoes with butter.

Remove from oven, sprinkle with paprika and cheese and bake for 5 more minutes.

Note: You will need an adult's help with this recipe!

Yesterday I planned on laying on the couch and surfing HBO until noon, but better drama was taking place in my own front yard. First Mark arrived to gear up for the big fishin trip. Matty Stewart said something about the gas grill he had packed, "when was the last time you cleaned that thing?" Mark wasn't happy. Then they got the boat hooked up to the truck and Matt realized that he had left the key tuened on the day before when he was polishing the dash board with a Q-tip, drinking Bardari Lymon, and dreaming of fishing. Batteries charged, they finally left about 10 am. I had dilly beans for breadfast and planted 25 lilies. Ya gotta love fishin.
Posted by susan at 8:02 PM No comments:

Off to East Grand Lake 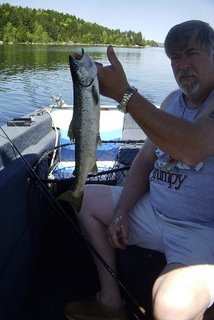 In hopes of catching lots of salmon. Matt actually calculates the water temp, air temp, wind speed, and whatever else he can think of to determine where the fish are. It's an addiction but I guess he could be doing worse things.
Posted by susan at 8:44 AM 2 comments:

Things to do while Matt is fishing

1. Wash the windows and the dog.
2. Weed and mulch.
3. Plant, plant, plant.
4. Give myself a manicure and a pedicure.
5. Take clothes I do not wear to Goodwill.
6. Play bocce.
7. Crank Dave Matthew's Band on the surround sound.
8. Watch "The Ringer."
9. Not have to make dinner.
10. Finish the Japan scrapbook for Mom and Dad.
11. Ride the tracktor around the yard with no purpose in mind. 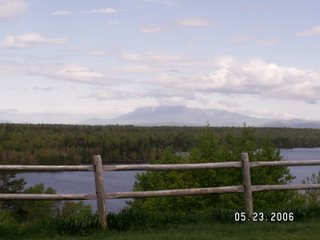 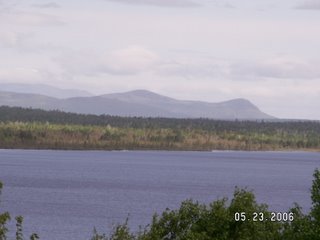 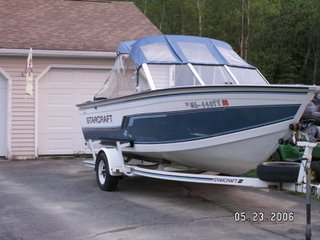 The boat has been spit and shined for Matt's fishing trip to East Grand Lake. He leaves on Monday so the next couple of days will be spent on camping preparations and fondling of tackle. The weather has finally changed for the better, no rain and temps in the seventies. Summer, glorious summer! Happy Memorial Day!
Posted by susan at 7:35 AM No comments: 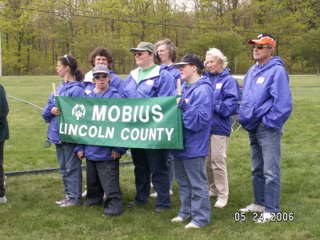 The 1st annual York County Bocce tournament was a great success. We played some great games, had lunch in the rain, and saw some new and old friends. Here's some pics: 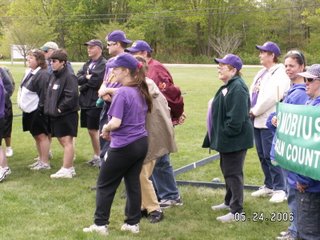 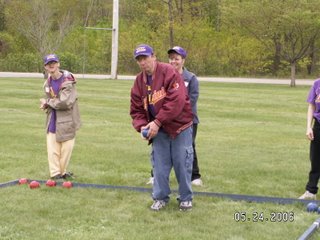 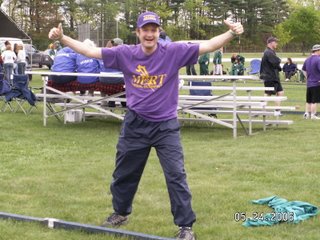 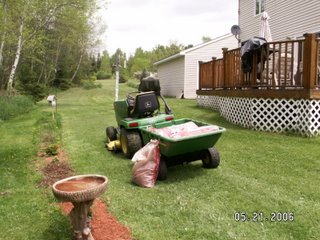 I love my new garden tractor or "yard bitch" as I so fondly call it. 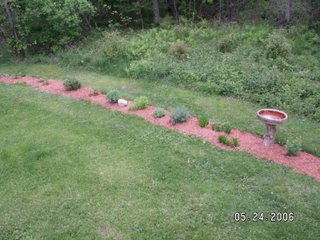 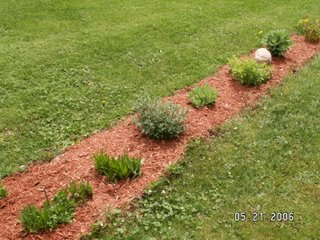 I love weeding and mulching.
Posted by susan at 7:29 PM 1 comment:

And the games keep comin'

Tomorrow I am off to Old Orchard Beach again, at least this time it's not Jan. 1st and I have to run into the ocean. I off to the 1st Annual York County Bocce Tournament. You faithful readers know that York County was recently flooded, but hey we're used to rain. We have eight atheletes attending and are taking two vehicles headed out early in the morning. Must go pack a lunch and stuff.
Posted by susan at 7:00 PM No comments: 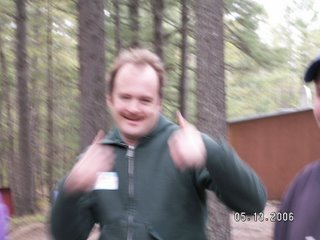 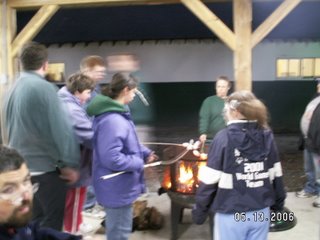 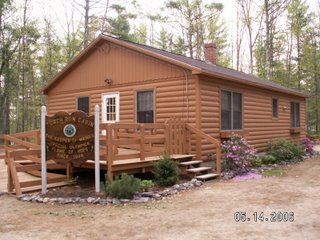 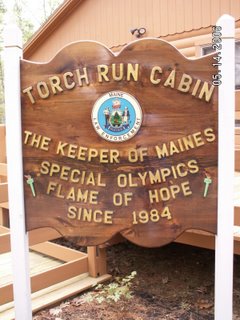 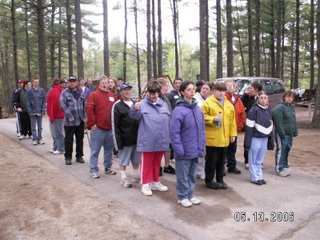 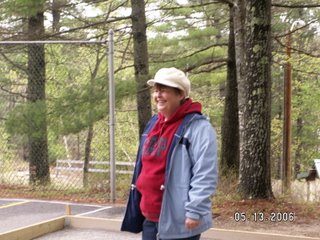 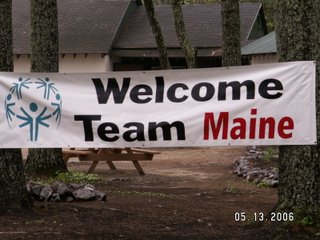 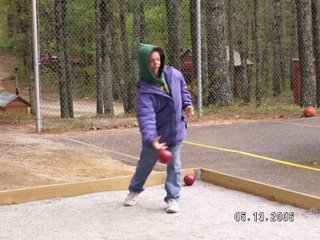 This is Christy in action. The weekend was full of team building activities, rain, bocce, a pot luck supper at the American Legion in Mechanic Falls, team and coaches meetings, rain, a spaghetti dinner, parade formation practice, rain, smores, and smore rain. We had a good time getting to know each other and being cold and wet.

I hate sleeping in a sleeping bag, rain, and red hot dogs.
Posted by susan at 7:34 AM No comments:

Christy Hopkins, 23, who lives on Westport Island with her granmother, Sandy, is trying to raise $500 to attend the 2006 National Special Olympics in Iowa. "I was proud and excited when I first learned that I had been selected," she said in an interview this week. She was selected to compete in the Special Olympic Natinal Games in Ames, Iowa from July 2 to July 7 by her coach. Only 35 Maine athletes were chosen from the 3,500 athletes competing, In addition, 2,000 coaches will be attending the event, which is expected to attract 30,000 spectators, 12,000 family and friends and 8,000 volunteers. Christy, who also competes in swimming, cross country skiing and track events in the Special Olympics, will compete in team bocce ball. Bocce ball is a game played with up to 8 players. Each player must roll two large balls towards a smaller ball which has already been thrown onto the field. The players are given points for the number of bocce balls thrown closest to the smaller ball called a pellino ball. Although this is Christy's first trip to the national games, she has been competing in Special Olympics for 10 years. she will get a chance to compete against other athletes at a three-day training camp at Camp Tall Pines in Poland, ME. To raise money for her trip, Christy will host a car wash and bottle drive at Shaw's Supermarket, where she works.

York county and the lower, western part of Maine was hit with a massive amount of rain this weekend. I know because I was camping all weekend in that part of the state. I tried to call Jerry tonight, phone busy of course, to let her know because Christopher and Dean live in that area. More than 2000 homes were evacuated and bridges and roads are out all over the place. The rest of the state had beautiful weather and I was so happy to get home! More about the camping trip later!
Posted by susan at 7:04 PM No comments:

And the games continue!

Today was the Area Track and Field competition in Brewer, in the rain, and I mean pouring rain at times. I was an age group leader for the 11 year olds and younger. Age group leaders get to wear pink hats, yell a lot, and try to maintain some sort of order in the midst of all the excitement. Never once did I hear an athlete complain about the weather or be nothing but ready to compete. It was a great day!
Preparation continues for my attending a 3 day training camp at Camp Tall Pines in Poland. I am excited to hear more about our upcoming trip to IOWA. For more information about upcoming state wide and national games link into www.specialolympicsmaine.org and national game information at www.2006nationalgames.org
Posted by susan at 7:30 PM No comments:

It's official, we are "carnies" 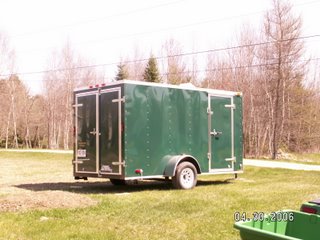 This is the new trailer we got to take ATM's to fairs this summer. Green Tree Cash Services - "because money doesn't grow on trees."
Posted by susan at 7:38 AM 1 comment:

My one faithful reader, Dad, deserves an update. Weekend activities include: taking Butch to an special olympic track and field practice, Matt cleaning up the boat, weeding, getting Mom a mother's day gift, going for a hog ride, and more weeding. Oh yeah, and talking to my sister at least three times over the course of the weekend.
Posted by susan at 6:52 AM No comments:

My one faithful reader, Dad, deserves an update. Weekend activities include: taking Butch to an special olympic track and field practice, Matt cleaning up the boat, weeding, getting Mom a mother's day gift, going for a hog ride, and more weeding. Oh yeah, and talking to my sister at least three times over the course of the weekend.
Posted by susan at 6:52 AM 1 comment:

Sure signs that spring is here! 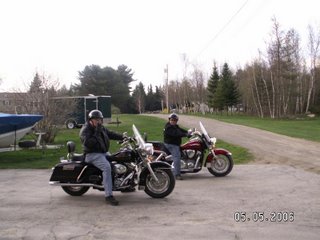 Matt and Phil ready to ride 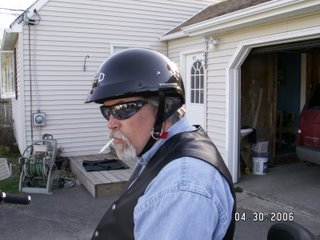 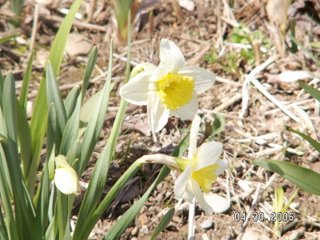 First flowers to bloom in the yard 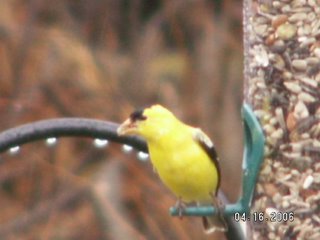 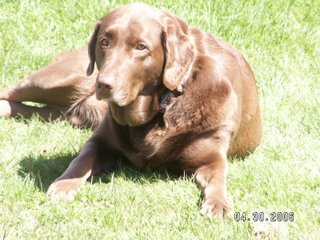 Annie working on her tan
Posted by susan at 6:41 AM No comments: